The other day I was talking about John Cage's infamous 4'33" with one of my students, while giving the student an overview of music history. When we got to 20th century music, it was Laurie, not me, who offered Cage's iconic - and iconoclastic - piece as an example of 20th century music. Laurie seemed both bemused and confused that a piece of "music" should exist, with a full, written out score, which requires the musicians to stay silent. This prompted a discussion about silence in music, and what Cage was trying to say in the work.

When Cage conceived it, in the years immediately after the Second World War, he was attempting to remove both composer and artists from the process of creation. Instead, by asking the musicians specifically not to play, Cage allows us, the listeners, to create our own music, entirely randomly and uniquely, by listening to the noises around us during four minutes and thirty-three seconds of silence, and removing any pre-conceptions or pre-learned ideas we may have about what music is and how it should be presented and perceived. The work is an example of "automaticism", and was, in part, Cage's reaction to a seemingly inescapable soundtrack of "muzak".

Neither composer nor artists have any control or impact on the piece; the piece is created purely from the ambient sounds heard and created by the audience. In this way, the audience becomes crucial: this aural "blank canvas" reflects the ever-changing ambient sounds surrounding each performance, which emanate from the players, the audience and the building itself.

On another level, as I pointed out to Laurie, Cage was challenging - and exploiting - the conventions of modern concert hall etiquette. By programming the work to be performed at a prestigious venue, with high-status players and conductor, the audience's expectations are heightened before the performance begins. No wonder the audience felt "cheated" the first time they heard it, and the piece remains controversial to this day.

Cage was not the first composer to conceive a piece of music consisting entirely of silence: examples and precedents include Alphonse Allais' 1897 Funeral March for the Obsequies of a Deaf Man, consisting of twenty-four blank bars (Allais was an associate of Eric Satie, a composer whom Cage much admired), and Yves Klein's 1949 Monotone-Silence Symphony, an orchestral forty minute piece whose second and last movement is a twenty minute silence. And there examples from the world of visual art too: American artist, and friend and occasional colleague of Cage, Robert Rauschenberg, produced a series of white paintings, seemingly "blank" canvases, which change depending on the light conditions of the rooms in which they are hung, the shadows of people viewing them and so forth. Like Cage's work, Rauschenberg's canvases are brought to life by their viewers and the venue in which they are exhibited.

"They missed the point. There’s no such thing as silence. What they thought was silence, because they didn’t know how to listen, was full of accidental sounds. You could hear the wind stirring outside during the first movement. During the second, raindrops began pattering the roof, and during the third the people themselves made all kinds of interesting sounds as they talked or walked out." John Cage, speaking about the premiere of 4'33" 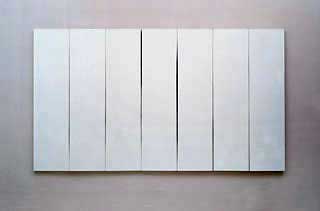 I've never been to a live performance of Cage's 4'33", though I did hear it on Radio Three, a "live" broadcast of a performance given at the Barbican Centre by the BBC Symphony Orchestra in 2004. Listening at home, one could easily be distracted and drift off to do something else. Thus, I would love to go to a performance of the work to fully experience it, to sit and listen to the sounds of the concert hall - all the murmurations, breathing, whispering, programme-rustling, snuffling, air-conditioning humming, street sounds from outside (sirens, tube trains rumbling). And also to have the opportunity to "imagine the sound" in one's own head.

Silence is very important in music. Why else do we have rest markings and fermatas (pauses) to demand silence from the performer? Composers use silence to create drama, suspense, anticipation, to allow us to savour a particularly delicious or sumptuous phrase, a really rich harmonic sequence, or cadence, and to prepare us for, or surprise us with new material. Composers such as Messiaen and Takemitsu employ carefully-nuanced silences to create atmosphere, and to allow the listener (and performer) time for repose or contemplation. And think about the two minutes of silence we observe on Remembrance Day and during the Cenotaph ceremony on Remembrance Sunday. While people fall silent in remembrance, we hear sounds around us more acutely. In 4'33" Cage is asking us to focus on the sounds around us, to listen to background noise, rather than blanking it out.

These days, in our busy lives, we are bombarded with sounds, and noise pollution is the companion to modern life. I quite often have the radio on all day when I am at home (even when I am practising), and when my son gets in from school, more often than not, he plays music on the computer via iTunes or Spotify, or turns the tv on. Then there are sounds from outside: street sounds (traffic, roadworks, aeroplanes), people sounds (voices, mobile phones, footsteps), nature sounds (dogs barking, birdsong, wind whistling, rain falling). Often, if I've had a houseful of people over a weekend, the first day I am alone, I leave the radio off and simply savour the "silence" around me - which of course isn't silence at all, because I live on the edge of a huge metropolis.

So to me Cage's 4'33" is important not just in the history of modern music, or the concept of artistic "creation" and our notions of what constitutes "music", but because it forces us to listen to silence, to take time out to listen, and really listen. It is also the best example, in my mind, of audience participation: it is music which invites us to "join in", take part, and make our own unique contribution to the whole experience.